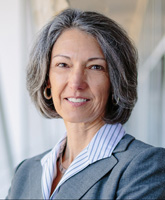 Cathy, a 1982 graduate, is retired from the Air Force with 25 years of service. During her Air Force career she piloted the KC-135, T-37B and the UV-18. She also commanded at the squadron level at McConnell AFB, KS, leading both the 22d Operations Support Squadron and the 344th Air Refueling Squadron; the 319th Operations Group at Grand Forks AFB, ND; and the 22d Air Refueling Wing at McConnell AFB, KS. Cathy deployed on numerous occasions in support of the Global War on Terror. During Operation ENDURING FREEDOM, she commanded an air refueling group supporting B-52s over Afghanistan. She also commanded a deployed operations group performing four different aircraft missions during Operation IRAQI FREEDOM. Cathy also deployed as the Deputy Director of Mobility Forces, directing mobility assets in Iraq, Afghanistan and the Horn of Africa. Her staff assignments include her tours as an assistant professor and executive officer in the Department of Behavioral Science and Leadership at the US Air Force Academy; as Chief, Deployment Division, US Transportation Command; and as Director, Air Force General Officer Management Office, Washington, D.C.

Since retirement, Cathy has worked for Boeing conducting weapons system integration on the B-52 and also software development on the KC-46A. She also worked for Spirit AeroSystems as Director, Business and Regional Jet programs. Today, Cathy is an executive leadership coach and organizational effectiveness consultant. In her spare time, she volunteers as an Emergency Medical Technician in Wichita, KS.