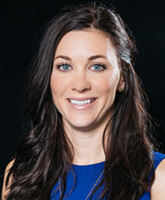 Emma is the daughter of Tony (class of 1976) and Priscilla and spent her childhood counting the number of states she lived in as a military brat. While at the Academy, she loved living in Cadet Squadron 19 and eventually led the Wolverines as Squadron Commander to Outstanding Squadron of the Year. Upon graduation, Emma was commissioned as a special operations intelligence officer and spent her Air Force career either overseas supporting counterdrug efforts or counterterrorism operations in the Middle East; she was awarded a Bronze Star during her last deployment for her combat efforts in Iraq. She decided to separate from the Air Force in 2016 and started her civilian career in the high-tech industry. Emma has since started a defense company with a couple fellow USAFA alum focused on bringing advanced technology solutions to various DoD operational mission sets. In her free time, Emma has a passion for traveling, food, spending time with family and friends, and sports – but all of those things are best enjoyed with her husband and Air Force pilot Chris Spach and their Bernese Mountain Dogs, Gunner and Harley.