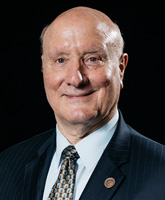 Garry is a member of the Class of '68 and served 22 years active duty flying 5 different aircraft and serving 2 tours in Security Police [now called Security Forces]. The next 22 years were spent in project management with the last 12 years as the President and CEO of Pocket PM, LLC; a company which he co-founded in 2002. Garry is a former president of the Class Advisory Senate where he volunteered for 10 years. He is also a guest lecturer in the Department of Management (USAFA/DFM). Garry and Tina (his wife of 52 years!) have two children and sponsored numerous cadets. Garry was recently selected as the 2020 recipient of the USAF Academy’s Distinguished Service Award.