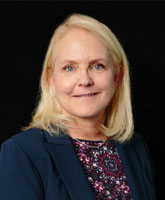 Ginny Caine Tonneson, Class of ’80, served as a joint specialty intelligence officer from 1980-2000. While stationed at USAFA as an Air Officer Commanding (AOC) and Deputy Group AOC, she won the O’Malley Award (outstanding AOC) and the 34th Training Group Officer of the Year Award. In addition, her squadron won the Superintendent’s Award as the top military/academic squadron. After retirement, she became the AOG Stewardship Director and Director of Class Giving. She earned her Ph.D. in Educational Policy, Planning, and Leadership from the College of William and Mary, and has authored/co-authored two books. Ginny has her own consulting company and works with educators in over 770 school districts and 20 countries. She was a four-time All-American in swimming, won the USAFA Outstanding Athletic Achievement Award, and has been a USAFA Parents’ Club president, USAFA Admissions Liaison Officer, Falcon Heritage Forum speaker, and is the 1980 CS-25 representative. She currently serves as the AOG Board of Directors Secretary and was a member of the Single CEO Selection Task Force. Ginny lives in Williamsburg, Virginia and is especially proud that her entire family has served in the Air Force (husband-USAFA ’80, son-USAFA ’04, and daughter-USAF surgeon).