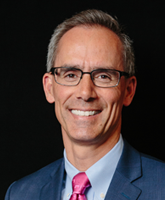 Glenn was appointed to the Board in 2017. Prior to his appointment, he volunteered on the Finance and Investment Committee and Audit Committee. Professionally, Glenn has served the membership of $700+ million Air Academy Federal Credit Union (AAFCU) since 1993 and as its CEO since 1998. He was the COO from 1995-1998 and CFO from 1993-1995. He is the president of the AAFCU Foundation and chairman of the Air Academy Service Corporation. While in the Air Force, Glenn served in the USAF Audit Agency and subsequently in the financial management career field and as the Director of Cost Analysis at the USAFA. Active in the community and credit union movement, Glenn serves as the vice chair of the Penrose Hospital System, on the Legislative Committee of the National Association of Federally-Insured Credit Unions, Governmental Affairs Committee of the Mountain West CU Association, and various other boards and committees. Glenn received his MBA from Colorado State University and enjoys his family, triathlons, and endurance events.