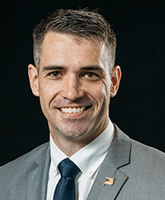 Captain Joseph Bledsoe III is a proud 2011 Air Force Academy Distinguished Graduate and AOG member. Upon graduation from the Academy, Joseph attended graduate school at the University of Maryland and received his Master's Degree in Public Policy. While living in Maryland, he worked in the U.S. House of Representatives implementing strategic political strategy. Captain Bledsoe then completed pilot training and now serves as a Fight Commander and F-15E instructor pilot where he is entrusted with the inspiration and supervision of the next generation of combat airpower aviators. Joseph has over 1,000 F-15E hours, including 344 combat hours over Iraq and Syria. Joseph is married to his high school sweetheart, Alicia, and has two energetic boys—Treyson (3) and Daxton (1). In his free time, Captain Bledsoe is an active member in his local church and serves as an usher monthly. Joseph enjoys traveling with his family, reading, history, physical fitness and forming lasting relationships with those around him. He strongly believes these relationships are what inspire him to challenge old ideals in his pursuit of excellence.