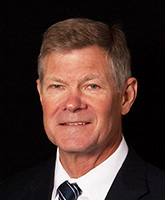 Larry New is vice president of Strategic Development and Experimentation for Boeing Phantom Works – a business with industry-leading, networked-enabled capabilities in defense, space and intelligence. In this role, he leads a group responsible for leadership and strategic direction in developing an understanding of future customer capability gaps and potential solutions, developing objectives and strategy for experimentation across Boeing’s Defense, Space & Security businesses, and increasing integration across Phantom Works’ divisions.

Before joining Boeing in January 2009, New served in the U. S. Air Force. Prior to retiring from active duty as a major general on Feb. 1, 2009, he served as Deputy Director for Force Protection, Capabilities, Resources, and Assessments (J8), the Joint Staff. While there, he led the Joint Integrated Air and Missile Defense Organization, the Joint Requirements Office for defense of weapons of mass destruction, and the Protection Assessment Division.

A command pilot-rated aviator, New has logged more than 3,500 flying hours in numerous fighter and trainer aircraft, including the F-15 and F-16. He is the recipient of numerous awards, including the Defense Superior Service Medal and the Legion of Merit.