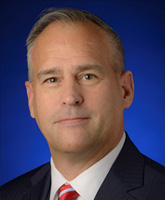 Dr. Mavity recently completed a 34-year career as a United States Air Force physician. Throughout his career he served in a variety of clinical and leadership positions culminating in a series of senior leadership positions involved with strategy, policy, and execution. Following retirement he served briefly at NASA Headquarters as NASA's Director of Health and Medical Systems. He is currently transitioning from practicing as a part-time preventive medicine physician with EHE Health to assume a fulltime Medical Director position with Inova Health System's Corporate Health Section.

Dr. Mavity received a Regular Commission in May 1984 as a Distinguished Graduate from the United States Air Force Academy. He then attended the Uniformed Services University of the Health Sciences where he received his Doctor of Medicine (MD) degree in May 1988. He completed a transitional internship at Malcolm Grow Medical Center in June 1989. Following seven years as a base-level flight surgeon, he completed his advanced specialty training in the USAF Aerospace Medicine Residency at Brooks AFB in June 1999. Subsequently he has been the Chief of Aerospace Medicine at both Kunsan AB, 1999-2000, and at Cannon AFB, 2000-2002. He then commanded the 95th Aerospace Medicine Squadron, Edwards AFB, from 2002 to 2004, before being assigned as the Chief of Operational Medicine, Office of the USAF Surgeon General, 2004-2006, and then as the Deputy Air Surgeon, Aeromedical and Professional Services for the Air National Guard, 2006-2008. Subsequently, he commanded the 332d Expeditionary Medical Group and Air Force Theater Hospital at Joint Base Balad Iraq from 2008-2009, then returned to the Office of the USAF Surgeon General as the Director of Medical Readiness and the Chief of Expeditionary Policy and Operations, 2009-2011. Dr. Mavity was then handpicked as the Command Surgeon for Air Forces Central Command from 2011-2013, and then as the Command Surgeon for the United States Central Command, overseeing all medical operations across the Middle East and Central Asia regions. Prior to retirement he returned to the Office of the USAF Surgeon General as a Special Assistant for Invisible Wounds and Wounded Warrior Programs. He is a Chief Flight Surgeon with over 1400 flight hours in various aircraft, to include 650 hours in the F-16. He is board certified by the American Board of Preventive Medicine in the specialties of Aerospace Medicine and General Preventive Medicine, and is a Certified Physician Executive.