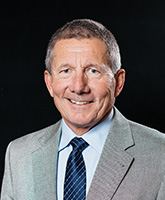 Lt. Gen. (Ret.) Mike Gould is the CEO of the Air Force Academy Association of Graduates and the Air Force Academy Foundation. He served as the 18th Superintendent of the U.S. Air Force Academy from June 2009 to August 2013, when he retired from the United States Air Force. He founded his own consulting firm in Colorado Springs after his retirement and served on several boards including a seat on the inaugural College Football Playoff Selection Committee. Gould earned his commission and a bachelor’s degree in behavioral science from the U.S. Air Force Academy in 1976. He commanded an operations group, an air refueling wing, an air mobility wing and the Cheyenne Mountain Operations Center. He also commanded the 3rd Air Force, Royal Air Force Mildenhall, England, and the 2nd Air Force, Keesler AFB, Miss. His staff assignments included three tours at Headquarters U.S. Air Force, along with duty as the Air Force aide to the president and senior military assistant to the secretary of the Air Force. Prior to becoming the Air Force Academy superintendent, he was director of operations and plans for U.S. Transportation Command at Scott Air Force Base, Ill. A command pilot, Gould has flown more than 3,250 hours in a variety of aircraft. He holds a master’s degree in human resource development from Webster University and has completed graduate courses at the Air Command and Staff College, the National War College, the Kellogg Graduate School of Management at Northwestern University, and the John F. Kennedy School of Government at Harvard University.