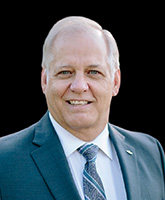 Michael R. (Randy) Helms, Colonel, USAF (Ret.), is the president of the AOG Class Advisory Senate and serves on the AOG Board of Directors. He retired from the Air Force Academy Foundation in July 2019. He joined the USAFA Endowment February 2016 and served as a Major Gift Officer, Director of Class Giving and finally as Campaign Director for the Foundation. Prior to coming to the Foundation, he served in multiple civilian leadership positions at National Defense University; Dean of Administration and Chief of Staff, Center for the Study of Weapons of Mass Destruction, Senior Research Fellow, and the University’s Director of Human Resources. Mr. Helms entered the Air Force in 1979 after receiving his commission and B.S. in Aeronautical Engineering from the U.S. Air Force Academy. He served in multiple strategic airlift units, commanded at the squadron and group level, and served three Pentagon tours. On a tour back at the Academy he mentored cadets as an Air Officer Commanding (AOC). As a staff officer, he was assigned to U.S. Transportation Command, OSD, Joint Staff, and Headquarters U.S. Air Force. He was an International Fellow at the Indian Defence Services Staff College. His last military assignment was at the National Defense University where he served as Chief of Staff. He retired from the Air Force in the rank of Colonel with over 29 years of active duty. He has three master’s degrees, and as a former command pilot, he has flown more than 5,000 hours in the T-39, C-141, TG-7A, C-21, and C-5 aircraft. He is married to Donna Foster, and they have three adult children and five grandchildren.