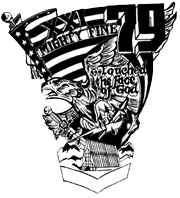 THE AMERICAN FLAGSymbolizes the country which we have all sworn toprotect and serve.

THE CADET CHAPELRepresents guidance to the class, high moral standards, and a strong sense of ethical leadership.

THE MOUNTAINSRepresent the obstacles which the Class of 1979 will face and the strength of each member ofthe class.

"TOUCHED THE FACE OF GOD"Recognizes our anxious anticipation of the mystery and majesty of flight.

THE AIRCRAFTRepresent the new frontiers which will protect the nation's freedom and the ever increasingtechnology of out times.

Randall Gricius saves the lives of two men who were in extreme danger of drowning at Ft. Walton Beach, Florida (1983).

Stephen Frangos named President of the American College of Occupational and Environmental Medicine (2019).