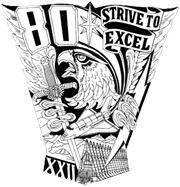 The class of 1980 Ring Committee held a competition to design the class crest for the ring. The class voted on the entries. The winner was our classmate, Tim Gulliver; however, Linda (Garcia) Cubero came-up with the modified motto that was used. Most of what you see are the mandatory elements: class year, falcon, chapel, Polaris star, saber, etc. The crest includes the space shuttle and part of the class motto. The space shuttle is applicable because it was on the horizon for the decade we had just entered. The entire class motto is Strive not to Equal, but to Excel. Although the class joke was to shorten the somewhat long motto to Strive Not; you will note the crest , from Linda's input, has the words, Strive to Excel.

THE CADET CHAPEL - Represents the high moral standards and strong sense of ethical leadership that we willtake with us when we leave the Academy.

THE MOUNTAINS - Represent the goal that the class sought to achieve by the end of the fourth class year.

Janet Wolfenbarger inducted into the Women in Aviation International Pioneer Hall of Fame (2016).

Anthony Aretz named President of the University of Great Falls (2016).

Christopher Miller named inaugural Johnson Chair for the Study of the Profession of Arms (2017).

Mike Hill receives the Patriot Award from the Center for Security Policy (2017).

Susan Helms is inducted into the Colorado Women's Hall of Fame (2018).

Mike Hill elected to the Florida House of Respresentatives(2018).