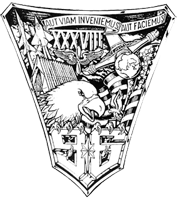 Class Motto: Aut Viam Inveniemus Aut Faciemus (We Will Find a Way or Make One)

THE PROP AND WINGSThe cadet collar insignia, which signifies the military growth of cadets. It also represents alinkage with the past-the insignia of the Army Air Crops (from which the Air Force sprang wasthe Prop and Wings)

THE FRONT RANGEIn the background stands the Front Range of the Rockies, a major part of the Academyenvironment which also signifies endurance and lasting strength. THE AIRCRAFTAn F-16 and an F-22, reminding us of the Air Force mission and totaling 38, the number of thegraduating class.

Gigi Simko is elected to the Board of Governors of the American College of Healthcare Executives (2018).

Rodney Bullard, Vice President of Community Affairs at Chick-fil-A Inc., is elected to the Board of Directors of Fidelity Bank in Atlanta, GA (2018).

Nicole Malchowski is inducted into the National Women's Hall of Fame (2019).