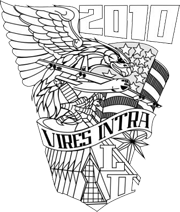 The Class of 2010 crest decorates the right side of the ring. It is composed of both compulsory and optional elements that together represent our Academy experience. The significance of the elements on the crest are listed below.

Graduation Year. Our graduation year is boldly placed at the top of our crest, clearly identifying the crest as 2010's.

Eagle. The eagle, the proud symbol of our nation, is posed aggressively on our crest, clenching the saber. Just as the eagle is ready to strike, so must we be prepared to respond to our nation's call at a moment's notice.

Flag. The 10 visible stars and 10 visible stripes of the flag remind our class of the people who have gone before us and those will go after us in defense of our great nation -- and most importantly, our freedom.

B-52. The B-52 is the plane that flew over our Acceptance Parade at the end of BCT. That parade symbolized our completion of Beast and acceptance into the Cadet Wing. This plane holds a special meaning to the members of 2010 and also represents our class, the 52nd class to graduate.

Saber. The eagle's grasping of the saber links our crest to the crest of our legacy class, 1970, and our desire to follow their example of selflessly defending our nation.

Class Motto. 'Vires Intra" is Latin for our class motto, "Strength Within." Our motto captures the incredible bravery shown by our class exemplar, Lieutenant Luke, whose bold actions in the face of capture and death helped shape the victory of the Allied forces during World War I.

Polaris. Always visible in the northern sky, Polaris serves as a reminder to our class that our Air Force operations reach far beyond Earth -- into outer space. It is an always-present reminder of those who have ventured into the unknown for the benefit of humanity and a guide for us to follow as we endeavor to meet the challenges of our world and beyond.

Ben Garland receives the Salute to Service Award from the National Football League (2019).