GENERAL (RET.) MARK A. WELSH III ANNOUNCED AS A NEW BOARD DIRECTOR TO THE UNITED STATES AIR FORCE ACADEMY ENDOWMENT 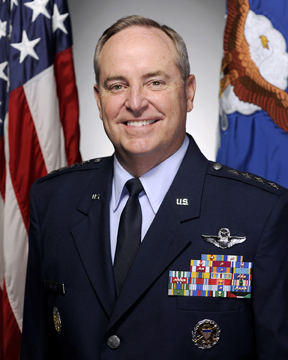 While on the cusp of it’s 10th anniversary, the USAFA Endowment is looking forward with a notable addition to its board of directors.

Former Air Force Chief of Staff General (Retired) Mark A. Welsh III has joined the Endowment’s Board of Directors. Welsh is a 1976 graduate of the United States Air Force Academy and currently serves the Dean of the Bush School of Government and Public Service at Texas A&M University.

“We are thrilled to have Mark join our Board of Directors,” said USAFA Endowment President and CEO Mark Volcheff. “General Welsh knows the needs of the Air Force Academy and what it will take to prepare our Air Force for the future. His leadership and mentoring will help guide the Endowment on its mission to provide the margin of excellence support that is critical to the cadet experience at the Air Force Academy.”

After 40 years of service, Welsh retired from the Air Force earlier this year. Welsh became the 20th Chief of Staff of the Air Force in August 2012, serving as the senior uniformed Air Force officer responsible for the organization, training and equipping of 660,000 active-duty, Guard, Reserve, and civilian forces serving in the United States and overseas. As a member of the Joint Chiefs of Staff, the General and other service chiefs serve as military advisers to the Secretary of Defense, National Security Council, and the President. Welsh served as the Commander of the U.S. Air Forces in Europe and Commander of NATO’s Air Command, Ramstein Air Base, Germany. He also served as Associate Director of Military Affairs at the Central Intelligence Agency, and as Commandant of the United States Air Force Academy.

Welsh, is excited about his involvement with the Endowment Board. "I'm incredibly honored to join the Endowment Board. There is no better cause than helping our cadets prepare for a life of service to our Air Force and the Nation. And there's no better group to stand beside in that effort than the members of this Board. I'm humbled by the opportunity and grateful for the chance to continue serving our Academy."