U.S. AIR FORCE ACADEMY, Colo. – The USAF Academy and the Academy's Association of Graduates are proud to announce the winners of the Air Force Academy's Distinguished Graduate Award for 2011. The award recognizes Academy graduates whose singular and distinctive contributions to our society and nation have set them apart from other graduates. The winners of the Distinguished Graduate Award for 2011 are Brigadier General Ruben A. Cubero and Mr. Richard D. McConn. They will receive their awards at a formal presentation during Academy Founder's Day in April 2012. 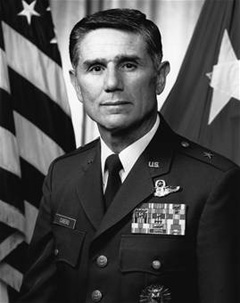 General Cubero graduated with the third class of the Air Force Academy, the Class of 1961. Following graduation, he has demonstrated a lifetime of outstanding service to the Air Force Academy and the nation. During his 37-year active duty career, he flew multiple aircraft for the Military Airlift Command. He accumulated over 6700 flying hours and completed 243 combat missions in Vietnam as a Forward Air Controller. His actions earned him a Distinguished Flying Cross and 14 Air Medals. Much of his later career was spent with the Academy Faculty, first as an instructor in the Department of Foreign Languages and later as permanent professor and head of the Department of Foreign Languages. In 1991, General Cubero was selected as the Dean of the Faculty for the Air Force Academy, a position he held for seven years. As the Dean, he supervised the 800-member faculty and managed a $60 million annual budget and assets of $250 million. Following his retirement from active duty in 1998, General Cubero was hired as the Athletic Director at the University of Colorado at Colorado Springs (UCCS) where he made significant improvements, including the “Exemplary Student Athlete” program which stressed individual responsibility on the part of all student athletes. During this same time, he also served as President of the Falcon Foundation where he guided the 150 Trustees through two membership meetings each year, acted as steward for the Foundation's $17 million endowment, and distributed 100 preparatory school scholarships each year. Since his retirement, General Cubero has voluntarily worked closely with the Association of Graduates and the USAFA Endowment—the core non-profit organizations that support the Academy. 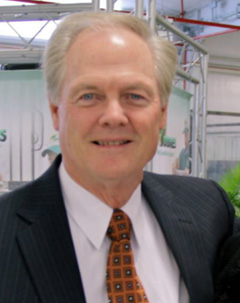 Also selected to receive the Distinguished Graduate Award was Mr. Richard D. McConn, a member of the Class of 1966. Following his graduation, Mr. McConn served the Air Force as an intelligence officer. At a very junior rank, he was assigned to Lowry AFB in Denver, Colorado, as the Chief Instructor of the Mobile Computer Training Team that pioneered intelligence data collection in the Air Force. Subsequent assignments took him to Washington D.C. where he served in the office of the USAF Vice Chief of Staff and in the Office of the Secretary of Defense, and then as a White House Aide to the President. After leaving active duty, he remained in the Air Force Reserve and served in a key position in the office of the USAF Chief of Staff. As a civilian, through talent and hard work, he built a multi-million dollar international logistics enterprise that is known for integrity and ethical conduct. Currently, he owns several companies with offices in Morocco, Tunisia, UAE, Jordan, Pakistan, Germany and Taiwan. Throughout his life, he has been a strong supporter of education. In his home state of North Dakota, he established an Aerospace Scholarship Endowment at the University of North Dakota. Seeing the need for additional opportunities for Academy graduates to prepare themselves for leadership positions in America, he established the McConn Scholars program which sends 2-3 active duty USAFA graduates to Georgetown University for a Master's Degree in Public Policy. After finishing their degree, these graduates spend at least the next year serving on a Congressional staff. The result is to give future senior officers a thorough understanding of how the U.S. government works. Mr. McConn was a founding director of the USAFA Endowment and was influential in getting Congress to pass the law which enabled the establishment of the Air Force Academy Athletic Corporation, a non-profit entity that will raise money to operate and improve the Academy's intercollegiate athletics programs.

In spirit, character, and accomplishment these remarkable men epitomize the values and ideals of the United States Air Force Academy. Both are exceptional representatives of the Academy.