U.S. AIR FORCE ACADEMY, Colo. — The United States Air Force Academy and the Association of Graduates are proud to announce the winners of the Academy’s Distinguished Graduate Award for 2012. This award recognizes Academy graduates whose singular and distinctive contributions to our society and nation have set them apart from other graduates. The winners of the Distinguished Graduate Award for 2012 are Lieutenant General (Retired) Marcus A. Anderson and Mr. Edward E. “Ted” Legasey. They will receive their awards at a formal presentation during Academy Founders Day in April 2013. 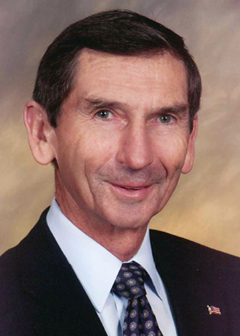 General Anderson graduated with the Class of 1961, the third class to graduate from the Air Force Academy. He earned his pilot wings at Reese Air Force Base, Texas, in 1962 and after two years as an instructor pilot, started flying F-100 fighter aircraft at Luke Air Force Base, Arizona. He remained in fighters through most of his military career. He served two tours in Southeast Asia—first flying F-100s at Bien Hoa AB, Vietnam, in the 510th Tactical Fighter Squadron and later flying F-4s at Ubon AB, Thailand. After the war, Gen. Anderson distinguished himself as Commander of the 334th Tactical Fighter Squadron at Seymour Johnson Air Force Base, North Carolina. After a NATO staff tour in Naples, Italy he spent three years flying F-15 “Eagles” at Bitburg AB, Germany and, in 1981, was selected as Commander of the 36th Tactical Fighter Wing, Bitburg Air Base. Following promotion to Brigadier General, he completed a staff tour at USAFE Headquarters, Ramstein Air Base, Germany. From 1984-1986, he served as the Commandant of Cadets at the Air Force Academy where he was instrumental in upgrading cadet facilities, expanding the airmanship programs and improving the pride, morale and esprit de corps in the Cadet Wing following the spring 1984 honor scandal. Promoted to Major General he served as the Director of Operations at Headquarters, Tactical Air Command followed by tours as Commander of 3rd Air Force, U.S. Air Forces Europe, Royal Air Force Mildenhall, United Kingdom, and then as Commander of the Air Force Operational Test and Evaluation Center at Kirtland Air Force Base, New Mexico. Promoted to Lieutenant General, General Anderson completed his military career as the Air Force Inspector General, Office of the Secretary of the Air Force in Washington, D.C. and retired in 1996. Since retirement, General Anderson has been involved at the Academy in a multitude of ways which have included serving as the Chairman of the Board of Directors for the Association of Graduates from 1999-2003; being an active donor to the AOG, the Sabre Society, the Falcon Foundation and the Air Force Academy Athletic Association. He has made significant donations to the Academy through the USAFA Endowment. As a Falcon Foundation Trustee, he chaired the Superintendent’s Honor Advisory Subcommittee which made recommendations that reinforced a stronger sense of honor among cadets. He has been Chairman of the Board for the Fisher Houses at Lackland AFB, San Antonio, Texas. He has served as National Commander of the Order of the Daedalians. Lt. General Mark Anderson demonstrates to the world the value of a military education from the United States Air Force Academy. 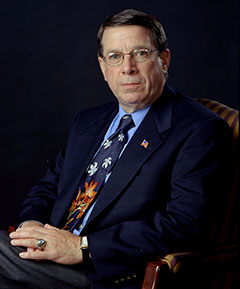 Also selected to receive the Distinguished Graduate Award is Mr. Edward E. “Ted” Legasey, a member of the Class of 1967. As a cadet, he was a Group Commander, Basic Cadet Training Squadron Commander (Honor Squadron), Co-Captain of the ice hockey team, and a regular on the Superintendent’s List. Following graduation, Ted was awarded an AFIT scholarship and attended the University of Pennsylvania from August 1967 to June 1969, where he earned an MS in Operations Research. From June 1969 to September 1973 he was assigned to HQ Air Force Logistics Command (AFLC), Wright-Patterson AFB, Ohio where he worked as an Operations Research Analyst on large, complex management information systems at the Advanced Logistics System Center. Based on his leadership, Ted was selected as the AFLC Distinguished Company Grade Officer of the Year in 1972 and was awarded the Air Force Commendation Medal for Outstanding Achievement. Assigned to Edwards AFB, California in September 1973, he evaluated logistics supportability and directed software test and evaluation for the B-1 bomber program as a member of the B-1 Joint Test Force. He was awarded the Meritorious Service Medal in September 1974 for Outstanding Service. In early 1976, Ted was recruited by the newly-formed Nuclear Regulatory Commission (NRC) to help establish the Office of Inspection and Enforcement. In July 1976, Ted resigned his USAF commission and was honorably discharged as a Captain. He worked as a senior civilian employee for the Nuclear Regulatory Commission to analyze the effectiveness of inspection programs at nuclear power plants in the United States. After two years, Ted left the NRC to join a partner in founding SRA International, a global information technology and professional services firm. Over the next 26 years as Chief Operating Officer (COO), Ted’s business acumen was instrumental in transforming the company into a major player in the information technology industry. Under his leadership, SRA was named by Fortune Magazine as one of the “100 Best Companies to Work for in America” for five straight years. At SRA, Ted hired and mentored hundreds of graduates after they had departed the service. SRA’s founding principles were modeled after the Academy’s core values and the company maintained the highest ethical standards in dealing with customers. In addition to his COO responsibilities, he has conducted seminars and made presentations on Business Ethics at many National Character and Leadership Symposiums. Ted has continually supported the graduate community by serving on the Association of Graduates Board of Directors for six years, with four years as the Chairman. As Board Chair he established and was a member of the 2005-2006 Blue Ribbon Council (BRC)—a group of nine distinguished individuals chartered to study and revise the Association of Graduates’ Governance structure. The BRC provided a detailed roadmap for modifying the bylaws which addressed election of directors, Board composition, election timing and many more details that have proven invaluable to the AOG’s success. Mr. Legasey is currently serving as a Director of the USAFA Endowment. Since retiring from SRA, Ted has continued to give back to his community by serving on numerous non-profit boards where his business experience has yielded positive results. He and his wife, Patricia, made the lead gift for the Memorial Pavilion at the Academy cemetery and also established an endowment for Character and Leadership with the AOG.

The tremendous accomplishments of Lt. General Anderson and Mr. Legasey have enhanced the U.S. Air Force Academy and are clearly inspirational. Their examples of service and excellence in every endeavor are worthy of emulation and have served to enhance the reputation of the Air Force Academy and its graduates. Both men are truly exceptional representative of the Academy and its vision of “developing leaders of character for the nation.”