U.S. AIR FORCE ACADEMY, Colo. – The United States Air Force Academy and the Association of Graduates are proud to announce the winners of the Academy's Distinguished Graduate Award for 2013. Each year, this award recognizes two graduates whose singular and distinctive contributions to our society and nation have set them apart from other alumni of the institution. The winners of the Distinguished Graduate Award for 2013 are Mr. A. Bart Holaday and General (Retired) William R. "Bill" Looney III. They will receive their awards at a formal presentation during the Air Force Academy Founders Day celebration on April 4, 2014. 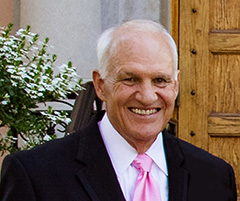 Bart Holaday, Class of 1965, achieved a record of exceptional success as an Air Force officer, federal civil servant, venture capitalist and philanthropist. As a cadet, he was a varsity athlete, class president, Cadet Wing Commander and earned a Rhodes Scholarship to study at Oxford University.

On active duty, Bart served in the Office of the Secretary of Defense for Systems Analysis, making several trips to MACV Headquarters in Vietnam. His leadership and accomplishments earned him the Meritorious Service Medal and the Joint Service Commendation Medal. Upon leaving the Air Force, he was recruited to a senior leadership position in the Department of Defense, serving as Director of the Econometrics Division in the Office of the Secretary of Defense (Systems Analysis). In all, he completed eight years of federal government service in senior management leadership positions in the Department of Defense, the Department of the Interior and the Federal Energy Administration finishing as a GS-18 Deputy Assistant Administrator of the FEA. In more than 20 years as a venture capitalist, he was an industry leader ultimately serving as an officer and board member of the National Venture Capital Association. He co-chaired an industry task force that established the first portfolio valuation and performance measurements standards for private equity. In these positions he advanced his vision of building the American economy based on innovation, entrepreneurship, investment and hard work.

As a philanthropist, he founded the Dakota Foundation, a foundation dedicated to funding entrepreneurial, non-profit organizations that help people help themselves in achieving greater economic self-sufficiency. The Dakota Foundation utilizes innovative investment tools and holds to a core belief that non-profit organizations can benefit from the application of business principles. An enthusiastic and life-long supporter of USAFA, he is the Founding Chairman of the USAFA Endowment, the named benefactor of the Holaday Athletic Center and a Trustee of the Falcon Foundation. Additionally, Bart funds a post-graduate Fellowship at Exeter College, Oxford University that each year sends a top graduate of the Air Force Academy to Exeter. He was also instrumental in the production of "Return with Honor," a movie documentary tribute to the Vietnam POWs.

In recognition of his outstanding service and unfailing support of the Academy, he received the Academy's Distinguished Service Award in 2009. Bart Holaday is a man of humility, passion, selflessness, generosity and commitment. He lives the core values of Integrity First, Service Before Self, and Excellence in all that he does. His implicit and explicit life's legacy promotes the very best of the Air Force Academy and the Long Blue Line of graduates. 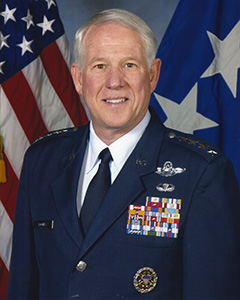 Also selected to receive the Distinguished Graduate Award is General William R. "Bill" Looney III, Class of 1972. General Looney embodies the core values of our Academy and the USAF—Integrity First, Service Before Self, and Excellence in all he does. As a cadet, his leadership abilities were recognized early as he was selected as Cadet Wing Sergeant Major, First Basic Cadet Training Commander, and Cadet Wing Commander, the first cadet to hold all three positions, during his junior and senior years at the Academy.

After graduation, General Looney began a career that would take him around the world and to the highest levels of command in the United States Air Force. Again his leadership abilities were recognized early with selection to the Air Staff Training Program (ASTRA). As a squadron commander, his squadron was recognized as the best squadron in USAFE and the top air-to-air squadron in the Air Force. During his career, General Looney commanded a flight, a fighter squadron, two fighter wings, a joint task force, an air expeditionary force, a military college, a warfare center, a numbered air force, two acquisition centers, and a major command.

At retirement, he had commanded more organizations than any other Air Force officer, past or present. During his 36-year career, he served on the Air Staff, the European Command Staff, and the Joint Staff and logged more than 4000 hours in a number of aircraft, with more than 2500 hours, including 62 combat hours, in the F-15 Eagle. General Looney received the AFA Man of the Year for California in 2001, the Congressional Citation of Merit in 2002, the Schriever Fellow Award in 2003, and the Hoyt S. Vandenberg Award for Aerospace Education in 2008.

After retirement from the Air Force, General Looney has been the President of Integration Innovation, Incorporated (i3), a highly successful defense services company with U.S. and international clients; he has also served on a number of corporate boards and is a national security consultant to many Fortune 500 companies. A published author and sought-after motivational speaker on the power of leadership, he has enabled the next generation of leaders to be better and do better than they ever thought possible. A strong advocate for the Academy, he has been a life member of the Association of Graduates since his graduation and has generously supported the Academy with his time, talent and treasure. He is a guest lecturer on leadership and serves as a Governing Trustee for the Falcon Foundation. He holds the distinction of being the first Academy Falcon Scholar to reach the four-star rank. General Looney's lifetime of service and accomplishments clearly warrants his selection as a 2013 Distinguished Graduate.

The tremendous efforts and accomplishments of Mr. Holaday and General Looney have enhanced the U.S. Air Force Academy, furthered the mission of the Air Force at large, and positively impacted the communities in which they live. Their examples of service and excellence in every endeavor are worthy of emulation and have served to enhance the reputation of the Air Force Academy and its graduates. Both men are truly exceptional representative of the Academy and its vision of "developing leaders of character for the nation."