U.S. AIR FORCE ACADEMY, Colo. – The United States Air Force Academy and the Association of Graduates (AOG) are proud to announce the winners of the Distinguished Graduate Award for 2014: Doctor Thomas J. Eller, Class of 1961, and General (retired) Kevin P. Chilton, Class of 1976. Each year, this award recognizes two graduates whose singular and distinctive contributions to our society and nation have set them apart from other alumni of the institution. Dr. Eller and Gen. Chilton will receive their awards at a formal presentation during the Air Force Academy Founders Day celebration on April 10, 2015.

“Our institution is unique in that our graduates, many with extraordinary talents that could be utilized for immediate personal gain, dedicate a portion of their lives to selflessly serve our nation,” said Association of Graduates President and CEO William “T” Thompson. “After their military careers, these individuals often go on to make powerful contributions in the private sector and toward the public good. It is our great honor and privilege to honor two of these giants among our institution’s alumni, Dr. Thomas J. Eller and General Kevin P. Chilton.” 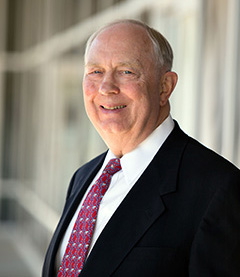 Dr. Thomas J. Eller has dedicated his life to serving the Academy, the Air Force, the Association of Graduates and the nation. After graduating from the Academy in 1961, Dr. Eller spent 20 years in the Air Force, serving as a pilot and faculty member at the Academy. In Vietnam, he flew 891 combat sorties in the C-7 Caribou and was awarded the Distinguished Flying Cross (DFC) for a heroic night medical evacuation under enemy fire in mountainous terrain and marginal weather. A second DFC, seven air medals and an Airman’s medal for non-combat heroism were awarded to him among numerous other commendations. He earned a master’s degree from Purdue and a Ph.D. in Aeronautics and Astronautics from the University of Texas, and returned to the Academy. For 13 years, from 1969 to 1981, he served as an Academic Instructor, Assistant Professor, Associate Professor, Assistant Dean of the Faculty, and Professor and Head of the Department of Astronautics and Computer Science.

Upon retiring from the Air Force, Dr. Eller worked for several aerospace firms including Martin Marietta Aerospace and Kaman Sciences. He was co-inventor of the GPS Magnetic Momentum Dumping System, which increased satellite lifetime by years. He managed the team that wrote the software for choosing launch windows to avoid space debris and was involved in and responsible for numerous advancements in aerospace technology.

Dr. Eller was a key player in creating the Association of Graduates, the Academy’s alumni association, and served as its president from 1979-1983. He has enriched the graduate legacy and has extended the Long Blue Line by having both a son and grandson who are graduates.

General Kevin P. Chilton was the first U.S. astronaut to rise to the rank of general officer -- four stars. After graduating in 1976 as a Distinguished Graduate, he attended pilot training and subsequently became a test pilot before serving as a NASA astronaut for 11 years.

After NASA, Gen. Chilton returned to the Air Force. During his illustrious military career he served as commander of a numbered Air Force, Space Command, U.S. Strategic Command, and the STS-76 space shuttle mission. Gen. Chilton has received numerous awards and decorations from both the Air Force and NASA, including the latter organization’s Outstanding Leadership Medal. In 2012, Gen. Chilton was inducted into the U.S. Astronaut Hall of Fame.

Gen. Chilton retired from the military after over 34 years of service. He now sits on three for-profit boards and two nonprofit boards. His expertise in space and strategic issues keep him engaged with concerns that are vital to our national security. Gen. Chilton is on the Board of Governors for Lawrence Livermore Labs and he is a mentor to CAPSTONE and the Defense Science Studies Group.

Gen. Chilton has continued to give back to the Air Force Academy in many ways, notably as a featured speaker, guest lecturer, Falcon Foundation member and AOG Board of Directors member. Chilton’s integrity, service and success coupled with his continued generosity of time and talent to his alma mater and alumni association, make him a most worthy Distinguished Graduate Award recipient.

Dr. Eller and Gen. Chilton represent the fourteenth class of Distinguished Graduates to be honored since the award was established in 2001. The tremendous accomplishments of these two individuals have enhanced the stature of the U.S. Air Force Academy, furthered the mission of the Air Force at large, and positively impacted the communities in which they live. Their examples of service and excellence in every endeavor are worthy of emulation and have served to enhance the reputation of the Air Force Academy and its graduates. Both men are truly exceptional representatives of the Academy and its vision of “developing leaders of character for the nation.”