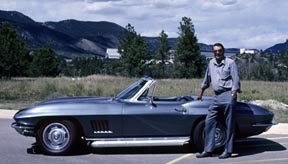 When did you start working for the AOG? I actually began working for the AOG in late 1978 as a captain in the Air Force. I was brought to the Academy by Jim Wheeler who was then the executive director of the association and also an active duty lieutenant colonel (then called a "dual-hatted" position). I was hired primarily due to my experience in publications (mostly newspapers and magazines at that time), having just earned a master's degree from Syracuse University in mass communications after receiving a bachelor's degree in journalism from the same school through the Airman's Education and Commissioning Program (AECP). Prior to being chosen for the AECP program, I had 14 years of enlisted time and had attained the rank of Technical Sergeant. On the "official" side of the house at the Academy, I was on Superintendent Ken Tallman's staff as the Director of Gifts and Memorials. Soon after arriving at the Academy I was promoted to major and upon my retirement from active duty at the end of 1981, I was hired as a full-time AOG employee the day after I retired, primarily responsible for our publications at the time which were our quarterly Checkpoints magazine and the annual Register of Graduates. I came to work the next day to the same office and desk, but in civilian attire!

What do you do to help AOG members? Early on at the AOG, I basically was the communications staff as the association in those earlier years could not afford to hire numerous staffers. So from early 1980 through the hiring of Dick Rauschkolb in early 1999 I was basically responsible for the entire magazine and the Register of Graduates, although during those years we had hired some part-time and some very few full-time help. I kid Dick on occasion that I still have the bronze plaque in my game room that shows him as my "assistant"! Dick was promoted to vice president for communications in mid 2000 about the time I was considering going part time. Bob McAllister, our current publications chief, was hired by Dick in May of 2000 and was named director and then vice president of Communications upon Dick's departure. As for helping AOG members, I have met and worked with so many grads (especially the earlier classes) over these many years that many of them now communicate directly with me as a "short cut" if they need any type of information from the association. Plus I have worked with so many class scribes in the past with whom I've developed special friendships. My wife, Jan, and I tailgate at every home and some away games with the Class of 1960, hosted by Jim Glaza and his wife, Jeannette, in an area in front of the stadium with the banner "Jurassic Park" that includes the Classes of 1959 through 1962, so the camaraderie continues there also. 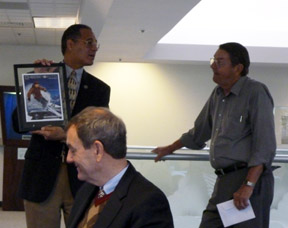 Can you share a great customer service story or an example of AOG teamwork? I think the most rewarding part of my job is one that a lot of folks would not consider high on their "to-do" lists. That is working with the next of kin of our deceased graduates and cadets to gather information for the obituaries and photographs for the Gone But Not Forgotten section of Checkpoints. The days and weeks after a spouse, son or daughter has died are traumatic, confusing and sad. So I guess while it is not the my most favorite task for the AOG, I do take considerable pride in working with and comforting our graduates' next of kin during this very turbulent time of their life.

Any tips or reminders for AOG members to get the most out of their membership? Not being a grad, I am always surprised at those members of the graduate community who seem to hold a grudge against the association. For some reason (primarily I guess due to the fund-raising), a few of our grads feel that the AOG is in business for no other reason than to make a profit. Believe me, this is not the case. While any institution needs to made enough profit to underwrite their primary functions and pay their staff, the services that the AOG and the UE provide and the support they provide the Academy far outweigh the profit margin. What with the magazine, all the online communications programs, reunions, brick and mortar donation projects, and the like, our organizations provide services to the Academy that would never be found elsewhere.

Do you have a favorite Air Force Academy moment, person, place, or memory? Not really one particular thing. However, while Doolittle Hall is a grand and necessary headquarters, I believe we have lost quite a bit of contact with the Cadet Wing once we moved out of the Fourth Group area in Sijan Hall. Except for a few special programs, we see very few cadets visiting our building. I think this has hurt our "rubbing shoulders" with the cadets who are going to be our future constituents. Sort of an "out of sight, out of mind" kind of thing. 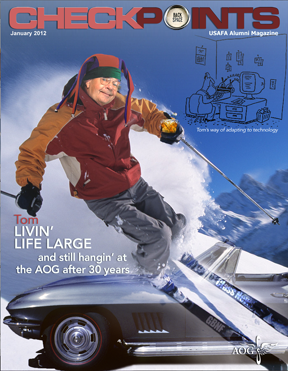 Getting to know you better, when you're not at Doolittle Hall we can find you... I enjoy playing golf, skiing, traveling with my wife, Jan, and my pride and joy is a fully-restored 1967 Lynndale blue Corvette convertible that doesn't get out of its own carpeted garage much in the winter.

Anything else you'd like to add or say to AOG members? Sure. I enjoy working for all of you out there.

Read about Tom's 30+ Year Anniversary with the AOG