The Young Alumni Excellence Award, sponsored by The Air Force Academy Association of Graduates (AOG) annually seeks and accepts nominations for graduates who are 15 years or less from their graduation year and have distinguished themselves by obtaining a high level of professional accomplishment whether in military or civilian life, demonstrating excellence in all they do. They possess high standards of integrity and character to positively reflect and enhance the prestige of the United States Air Force Academy.

If you know of someone you would like to nominate, please learn more on our website about the process. If you have questions regarding this form, please contact Corrie Grubbs.

Thank you to all of the nominations that were received for our inaugural year of the Young Alumni Excellence Award. Below are the 4 Young Alumni that were selected to be the Awardees: 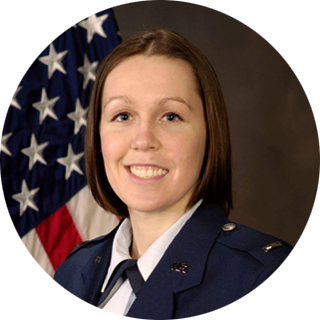 A behavioral influences officer, Cooper serves with the National Air and Space Intelligence Center’s Regional Threats Analysis Squadron. After graduation, she earned a masters in social psychology at the University of Kentucky. As lab manager for the University’s R. H. Smith Lab, she supervised undergraduate research assistants on a variety of technical projects. She also volunteered at the Newman Center on campus, at the local Ronald McDonald House, and at a downtown soup kitchen. Serving with the 711th Human Performance Wing at Wright-Patterson AFB, Ohio, she was lead scientist for the Human Assessment research team, was selected to join the AFRL Commanders’ Action Group, and undertook a RESOLUTE SUPPORT deployment to Afghanistan. While overseas, she was a leader in the Kandahar Catholic community and volunteered at the base USO. Returning to Wright-Patterson AFB, Capt. Cooper was engaged in the STEM-initiative Cyberpatriot program, mentoring high school and middle school students in cyber competitions. She is active in her parish, and assists the St. Vincent De Paul Society in delivering food to needy families. She has also played pivotal leadership roles in the Company Grade Officers Council and in the Southwest Ohio AOG Chapter.

I am humbled and honored by receiving this award. It has all been for the glory and by the grace of God as well as my love to serve and try to help others. 'I can do all things through Christ who strengthens me,' Philippians 4:13. I have been blessed to have had wonderful mentors, teammates, and a steadfast support system. I would also like to especially recognize my parents Brian and Cecilia Cooper, my closest friend Nikki Rubeck, and all of my other friends and family for their unending love and sacrifices throughout this entire journey. 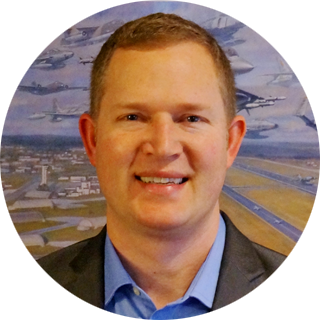 Mulder is currently assigned to the Joint Staff at The Pentagon. Right from the start of his career, Mulder stood out. He was the first of his contemporaries to qualify as a 4-ship flight lead and functional check pilot at Moody AFB, where he served as an instructor pilot. He was hand-picked for transition to the F-16 and achieved top qualifications as both an instructor and check pilot. Across seven years in the F-16, he accrued 1,100 hours over Iraq and Libya, and while supporting exercises in Europe, Turkey, Alaska and CONUS. As part of his deployed ground duties, Mulder led the effort to open a bare base squadron for follow on forces. Later serving at Shaw AFB, he led a diverse team managing a $76 million flying hour program and a $54 million simulator contract. Nominated to fill a flight commander position, he was rated No. 1 among 15 flight commanders, and his squadron was recognized as the outstanding squadron of the year. Mulder also served with distinction in other assignments, including exec to the Spangdahlem AB Wing Commander and Aide-de-Camp to the United States Air Forces Europe and Africa Command commander. While working on the Joint Staff as a Branch Chief, Mulder shouldered the responsibilities of an Admissions Liaison Officer serving prospective cadet candidates. He mentored numerous applicants, other ALOs and advocates of the Academy, providing presentations and engaging candidates at a wide range of venues. Highly active in the community, he serves as a coach, volunteers at the local food bank, is involved in church and school programs, and recently honored the fallen at Arlington National Cemetery as part of the Wreaths Across America program.

I'm honored to be a recipient of this award and am committed to serving my family, country and community in the years to come. 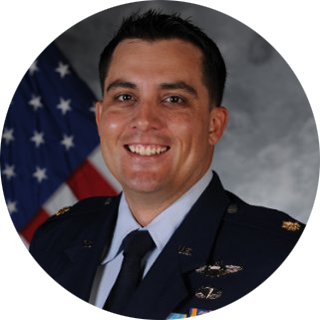 Maj. Switzer currently serves as the chief of Mobility Air Forces Integration for HQ Air Mobility Command, Combat Operations Division Nellis AFB, Nevada. He is an aviator with more than 270 combat missions. After graduation from USAFA, Switzer was stationed at Davis-Monthan AFB awaiting pilot training. At D-M, he managed Air Combat Command’s largest wing flying hour program. After filght training, he served as a KC-135 copilot at Grand Forks AFB. Switzer would deploy seven times, flying more than 1,400 combat hours and refueling 1,455 aircraft in support of Operations Enduring Freedom and Iraqi Freedom. In addition to his personal combat role, he served as the 319th Operations Group Deployment Liaison Officer, coordinating aircrew mobilization and providing air refueling for highly sensitive reconnaissance operations. As part of the 2009 Red River flood relief effort, Switzer stood up an emergency air operations center and coordinated what proved to be life-saving mission support. Switzer’s airmanship was instrumental to a number of prestigious unit awards, and he himself was named 912th Air Refueling Squadron Pilot of the Year. Following a distinguished assignment as a flight commander at McConnell AFB, he attended the USAF Weapons School, and currently serves as Air Mobility Command’s liaison to the Air Warfare Center at Nellis AFB where he has materially improved multi-domain mission integration and combat capability.

Wherever he has been stationed, Maj. Switzer has found a way to give back, spending some nine years in Big Brothers/Big Sisters, and volunteering as a band clinician for junior high students. He also led Habitat for Humanity teams refurbishing housing units and is an active volunteer with the Boy Scouts of America.

I am deeply humbled and extremely honored to receive recognition as a Young Alumni Excellence Award recipient. It is my strongest wish that I can continue to make a difference to our national defense and represent the highest ideals of service the Academy has ingrained in me and all of our fellow graduates. Parati Ad Bellum! 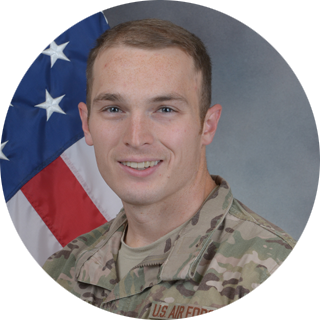 Synovec is a civil engineer currently assigned as the deputy engineering flight commander with the 823d RED HORSE Squadron. After graduating from the Academy, Synovec was assigned to Davis-Monthan AFB where he excelled in a variety of roles, particularly as the Readiness and Emergency Management flight commander and Installation Emergency manager. During his first combat deployment, Synovec was the lone engineer at Forward Operating Bases in Northern Afghanistan. He provided direct support to the 101st Airborne, U.S. Army and Navy Special Operations Forces, and the Afghanistan National Army. Upon re-deployment to Davis-Monthan, he provided vital technical support to the Trinidad and Tobago Air Guard in recapitalizing its aircraft fleet. While attending graduate education at the Air Force Institute of Technology, he was named Company Grade Officer of the Year and was presented the Mervin E. Gross Award for the most exceptional student achievement in the graduating class. As part of the 823d RED HORSE Squadron, Synovec has designed close to $200 million in construction projects in 13 countries. Following deployment to the U.S. Central Command area as engineering flight commander and chief of design for the 1st Expeditionary Civil Engineer Group, he was named lead engineer and planner for the largest troop construction project in Air Force history. In this role, he works with 40 different organizations across the federal government in fielding a $101M air base in Africa. In recognition of this and his many exceptional achievements, Capt. Synovec was named Ninth Air Force Company Grade Officer of the Year and Air Combat Command’s Military Engineer of the Year.

Starting with the Class of 1959, the Air Force Academy has produced tremendous individuals of character that went on to shape the history of the Air Force, break down barriers, and become leaders in both the public and private sectors. Standing amongst my fellow alumni as a member of the Long Blue Line is among my proudest accomplishments in life, and I am deeply humbled and honored by the recognition as a winner of the Young Alumni Excellence Award. I only hope that I can continue to make a positive difference in the future to those around me and make my fellow alumni proud.